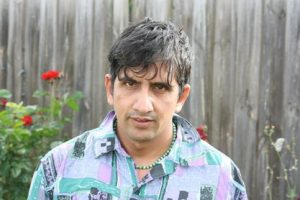 I am Baburam Poudel. Born in the mountains of western Nepal nearly fifty years ago in a village called Nawalparashi, my upbringing was culturally rich and economically poor. To be poor in a third-world country is to be very poor indeed.

Fortunately, my mother believed in education. She also welcomed my presence cooking, cleaning, dancing and singing with her friends. She loved me. Protected me. Respected me. My parents did not force me into an arranged marriage.

My mother worked very hard. She was generous. She was kind. She always looked to the future for her children. Even before I was raped by a family member, she told me, ‘Keep away from him. He’s bad, that one.’

By the time I was 12 years old, I knew I was attracted to boys more than girls, even though most of my friends were girls. Same-sex attraction was not heard of in my village of fifty houses, nor was it heard of in the next largest town two hours’ walk away where I attended high school, tending my small farm to pay for tuition and food for my brother and me.

This was 1985. In the remote, rural patriarchal society, Nepalese women had few rights. Young gay men had none. Amid the rigid traditional belief that only male and female exists, homophobia was rife. There was no formal sex education in the country. Birth control had only just been introduced. The AIDS epidemic was spreading through Asia. The news regularly reported police bashings of gay men. My religion rejected ‘people like me’, believing if you could not or would not make babies, you were worthless. I did not want to shame my parents. My own internalised homophobia and fear of abuse kept me in hiding.

Silence also forced me to live an isolated life. My world brimmed with pretence, anxiety and depression. Despite my strong, brave soul, I wanted to die.

I finished high school in 1991 and studied Science at university, but had to drop out because I could not pay the fees. I pursued a career in hospitality, becoming qualified and experienced in all aspects from reception to cleaning to food preparation and cooking. I left Nepal when I was 22 to seek fortune in the United Arab Emirates, but was deceived by the employment agent in Mumbai, India. He took most of my money and all of my chance to get to Abu Dhabi.

For seven years I lived in the slums of Mumbai. Not all slums are created equal. The first one was disorganised and dirty. The residents used the alleys as toilets. Dogs attacked you for your food. There were no mosquito nets.

I became gravely ill with malaria, typhoid and pneumonia. Fortunately I had made friends. One of these friends took me to hospital. According to the emergency doctor, I had just hours to live.

Recovering slowly, I found work easily. I worked three jobs in one day seven days per week, sleeping just four hours at night before starting all over again. These were my worst days. I was lost and alone. At times, suicide seemed possible and preferable.

Living in a windowless room the size of a large cupboard with a blue tarp for protection from the monsoon, one day my six roommates were out and I found myself alone. From my locked suitcase, I removed a magazine.

Furtively, I read an article about the stigma of being gay. About how society’s attitudes needed to catch up to the reality of how people live their lives. About how gay men suffered daily discrimination, which led to depression and suicidal thoughts.

For the first time in my life, I understood that I was not the only one. That there may be answers to the thousands of questions clouding my head. That I might live my truth.

Until then I had searched for answers through religions. I was born Hindu, and pursued insight though Christianity, Islam, Buddhism, Sikhism, Hari Krishna and Sai Baba. They taught me that I was impure, inauthentic and non-productive.

The magazine article had been written by an Australian named Geoffrey Heaviside. I made contact with him. We became friends. When Geoffrey came to India to set up support and advocacy for gay men, I worked as his translator. Through the Brimbank Community Initiative, he has helped hundreds and hundreds of people find their safety, negotiate the system, and live full lives.

Through utilising self-help and local community-based organisations, Geoffrey empowered the poor to access food, education, housing and employment. He provided financial, legal and medical support to gay people who had been abused. He advocated on health issues associated with gender minorities. He worked with the UNHCR. When the time came, he established support networks through social media and developed online tools to support people through suicidal ideation.

Over the years, we talked about Geoffrey sponsoring me to move to Australia. In 2007, I did move to Australia. I got work in kitchens and worked my way up to the position of chef, but did not make friends easily. I was quiet, shy and unused to expressing myself. My English was improving but nowhere near fluent. I didn’t know my way around. How would I ever meet anyone, let alone someone to love and love me in return?

The gay scene seemed out, loud, almost aggressive. I tried nightclubs, online dating, meeting people through mutual friends. Aside from a couple of fun nights, I felt financially, physically and emotionally used, scared, even more isolated. I wanted a special person to share my life with. To trust, respect and understand. Together.

I know these most important people want me to live my happiest life. To do this, they have given me an assignment: do not fear, do not be silent, do not hide yourself. Live a full life.

For too long I have feared pure rejection.

I fear not getting a job, losing a job, barriers to promotion. I worry – every day – about how I will earn enough money to live. I am unable to access community benefits and health services due to discrimination, for example with the stigma of HIV AIDS. I feel unwelcome in the mainstream community. I fear losing the few friends I have. I worry that my family will reject me. I am a target for financial exploitation, physical harassment and sexual abuse. I fear that my self-esteem will never recover. For people of colour, discrimination doubles.

This is why it has taken me forty-seven years to muster the courage to show my true feelings. Though a few close friends, family and colleagues know I am gay, today I come out to the rest of the world.

The human experience is unique to every individual. My gender identity, sexual attraction and relationship to my body are mine alone.

From today, I will not live behind. I will life my full life and, through, Brimbank, I will empower people like me to do the same.